On the last day of class, Clayton Christensen, a Harvard Business School professor, asks his students to turn those theoretical lenses on themselves to find cogent answers to three questions:

First, how can I be sure that I’ll be happy in my career?

Second, how can I be sure that my relationships with my spouse and my family become an enduring source of happiness?

Third, how can I be sure I’ll stay out of jail?

Though the last question sounds lighthearted, it’s not. Two of the 32 people in my Rhodes scholar class spent time in jail. Jeff Skilling of Enron fame was a classmate of mine at HBS. These were good guys—but something in their lives sent them off in the wrong direction.

As the students discuss the answers to these questions, I open my own life to them as a case study of sorts, to illustrate how they can use the theories from our course to guide their life decisions.

More at How will you measure your life?

Clayton Christensen, a professor at the Harvard Business School, is best known for his theory of disruptive innovation, in which he warns large, established companies of the danger of becoming too good at what they do best.

People who knew him personally speak of a fine human being.

You can find some of his seminal Harvard Business Review pieces here.

The theory of disruptive innovation was introduced in the Harvard Business Review in 1995 and it has since become part of common business parlance. Twenty years after the publication of the original article, Clayton Chistensen, Michael Raynor, and Rory McDonald present a state of the art in a recent HBR article.

The authors fear that

disruption theory is in danger of becoming a victim of its own success. Despite broad dissemination, the theory’s core concepts have been widely misunderstood and its basic tenets frequently misapplied. Furthermore, essential refinements in the theory over the past 20 years appear to have been overshadowed by the popularity of the initial formulation. As a result, the theory is sometimes criticized for shortcomings that have already been addressed.

And they are not pleased either with the way the expression itself is being used.

Too frequently, they use the term loosely to invoke the concept of innovation in support of whatever it is they wish to do. Many researchers, writers, and consultants use “disruptive innovation” to describe any situation in which an industry is shaken up and previously successful incumbents stumble. But that’s much too broad a usage.

executives with a good understanding of disruption theory tend to forget some of its subtler aspects when making strategic decisions.

They identify four points that get overlooked or misunderstood: 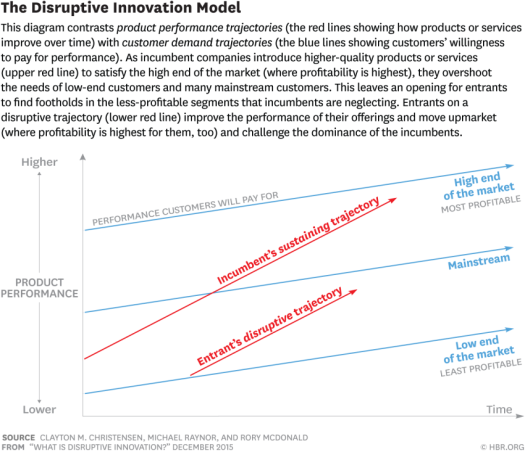 The latter part of the article reviews ways in which the authors’ thinking about disruptive innovation has evolved and it ends on a cautionary note:

Disruption theory does not, and never will, explain everything about innovation specifically or business success generally. Far too many other forces are in play, each of which will reward further study. Integrating them all into a comprehensive theory of business success is an ambitious goal, one we are unlikely to attain anytime soon.

Links to articles and research about management, leadership, and strategy.

Here’s what a reader says: “Some great, short, insights into the way we work and think.”